Part 27 includes a colour plate showing a powerful electric lifting magnet at work. It formed part of the article on Electric Lifting Magnets. The colour plate was also used as the cover design for this part. It also formed the frontispiece to Volume 2.

This week our cover is reproduced from a photograph supplied by the General Electric Company Limited. It shows a powerful electric lifting magnet at work in a scrap yard, moving empty shell cases. The lifting magnet is attached to a 5-tons overhead travelling crane. The magnet is circular, a type suitable for lifting such loads as pig iron, solid ingots and scrap metal. 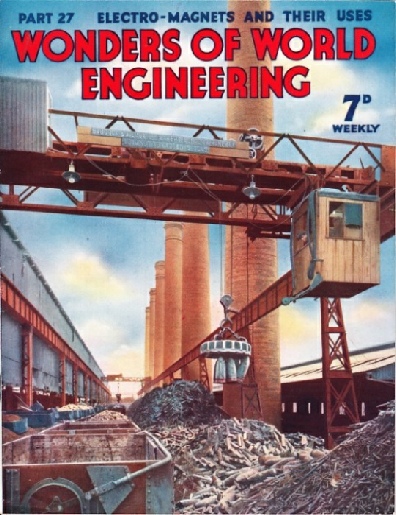 How Grain Cargoes are Handled

The Fight Against Floods (Part 1)

Problems of making suitable foundations in waterlogged ground, of strengthening faulty foundations and of treating of leaky tunnel linings have all been solved by various ingenious processes. This chapter is by Rolt Hammond.

A CAR PERFORMANCE TESTER, by which brake horse-power, fuel consumption and general performance may be checked after an overhaul. The tester consists of a drum carried in bearings on a framework and connected to a hydraulic brake. A variable load is applied to the car engine and a brake horse-power meter enables the exact power leaving the rear wheels to be read on a dial. The apparatus on the pedestal delivers measured quantities of petrol to the engine.

How Grain Cargoes are Handled

The large quantities of grain from the prairies of Canada, or other wheat-growing districts, to the flour mills of Great Britain can be handled rapidly in bulk only by special machinery of remarkable design. The flow chart which accompanies this article has been specially drawn by Edwin Judd who has written this chapter. The chart shows how grain is handled from the moment the grain ship draws alongside the quay until the grain is delivered into the huge storage bins which are known as silos. This is the ninth article in the series on the Romance of Industry.

TWO TRAVELLING PNEUMATIC ELEVATORS are situated on an island jetty at the Royal Victoria Dock, London. They handle 400 tons of grain an hour and deliver grain from ocean-going vessels to a large silo. The flexible pipes of the pneumatic elevator are able to penetrate to every corner of the ship’s hold. The plants dispenses, too, with the need for using any of the ship’s own machinery or gear.

Machines of many types and advanced design are now being used by large garages to test the performance and braking power of cars, and to maintain cars in the best possible running order. This chapter is by Howard Barry.

POWERFUL ELECTRIC LIFTING MAGNET at work in a scrap yard, moving empty shells and other pieces of scrap metal. The magnet, which is of the circular type, is attached to a 5-tons overhead travelling crane. Lifting magnets of circular shape are most suitable for such loads as pig iron, solid ingots and scrap metal of varying sizes. Direct, or continuous current is used for electric lifting magnets, and they are generally built for a 110-volts or 200-volts supply.

The Fight Against Floods (Part 1)

The engineer is continually battling against the titanic might of the Mississippi River. The problem has proved too formidable for local effort, and its solution is reorganization under national control. This chapter is by Harold Shepstone and is concluded in part 28.

One of the most spectacular applications of the principle of electro-magnetism is the use for industrial purposes of giant electric magnets capable of lifting loads of up to 25 tons in weight. This chapter is by Edwin H Judd.

LIFTING A RAIL-CROSSING ASSEMBLY with a large circular electro-magnet suspended from a crane. The cable which supplies current to the magnet is visible between the magnet and the jib of the crane. In the cabin of the crane is a switchboard from which the operator can control the current passing through the coils of the magnet.

FLOATING PNEUMATIC ELEVATOR for discharging grain from an ocean-going ship into a canal barge or coaster. This elevator, in the Port of Liverpool, is capable of handling 250 tons of grain in an hour. Vacuum pumps on the deck of the elevator cause the grain in the hold to be sucked through the flexible pipes into the receiver at the top of the elevator. Grain is discharged through chutes into the barge alongside, or across the deck of the vessel to the quay.

Discharging Grain From a Grain Ship

Flow chart showing how grain is discharged from a grain ship (left) either into a barge or into silo bins on shore. 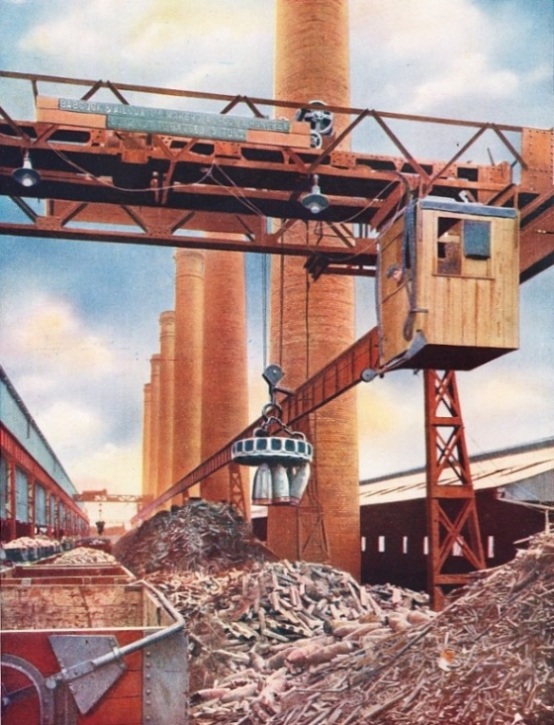 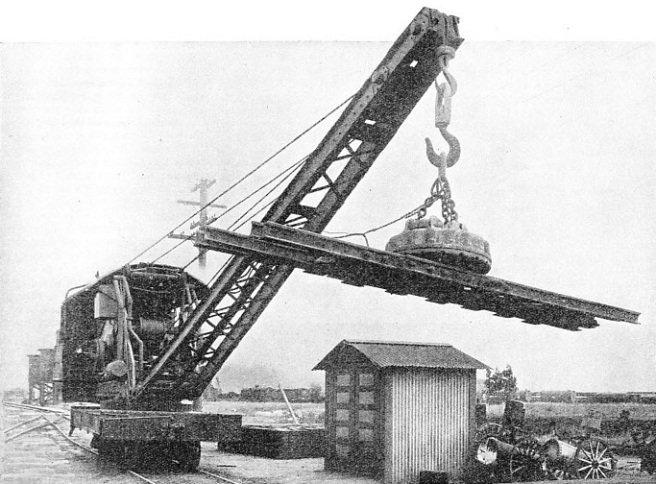 THE engineer is called upon to minimize, if he cannot eliminate, that dreaded bugbear of the traveller, sea-sickness. This malady is most frequently brought about by the rolling of a vessel rather than by her pitching, and the problem of reducing the rolling motion has been tackled in several radically different ways.

Sir Henry Bessemer tried to solve it by suspending a saloon in a cross-Channel steamer so that it would keep stationary while the vessel rolled round it. Later attempts have comprised the alternate emptying and filling of water tanks in the sides of the vessel in time with the wave action so as to steady her, or the use of a gigantic gyroscope. The gyroscope has been fitted to large vessels such as the Italian liner Conte di Savoia. The bilge keel is a common device, but is only partly effective.

One of the latest devices for minimizing rolling has been fitted to the Isle of Sark, a cross-Channel steamer of the Southern Railway Company plying between Southampton and the Channel Islands. It is known as the Denny-Brown Ship Stabilizer, and a view of that part of it outside the vessel's hull is given below. The stabilizer consists of an underwater fin on either side of the hull and situated about one-third of the vessel's length from the bows. The fins turn round on an axis so that they can be set at an angle to the waterline of the vessel. 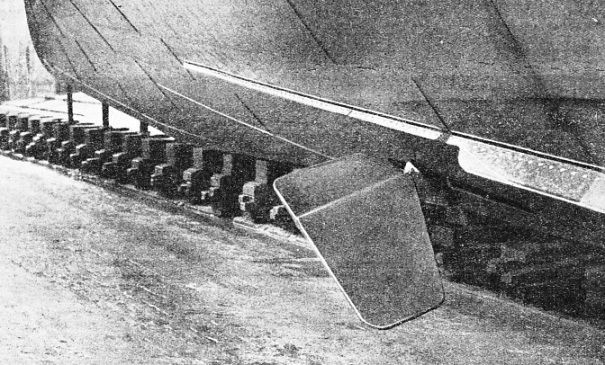 The fins function as follows. Suppose they are both set horizontally - that is, parallel to the waterline. In this position they would have no effect on the stability of the vessel as she moved forward. But, tilt one of the fins so that its trailing edge is downwards, then the flow of the water relative to the hull causes an upward pressure on that side of the ship and gives it a list to the opposite side. If the other fin is turned at the same time with its trailing edge upwards, the tilting effect is doubled. What happens in a seaway is this. A wave approaching the vessel endeavours to heel her over towards, say, the starboard side, but the fins are automatically set so as to give a heeling force to port. The two forces, that of the wave and that of the fins, tend to cancel each other out and the vessel remains steady.

As the wave passes under the ship her heeling tendency is in the other direction, but, in the meantime, the fins have been reversed as to their slope and, again, the ship is steadied. Rolling is not entirely eliminated, but is so reduced as not to worry most people. The tilting of the fins is effected by hydraulic cylinders, controlled, through electrical relays and other devices, by a tiny little gyroscope situated near the ceiling of the chart room, that is, at the highest practicable point of the ship and where the rolling motion would be most pronounced. A hand-regulating device in the chart room enables the automatic mechanism to be set to suit different periods of rolling, which vary with the state of the sea. The action of the stabilizer depends entirely upon the movement of the ship through the water, and it ceases when she is stationary.

This is the seventeenth article in the series on Modern Engineering Practice. 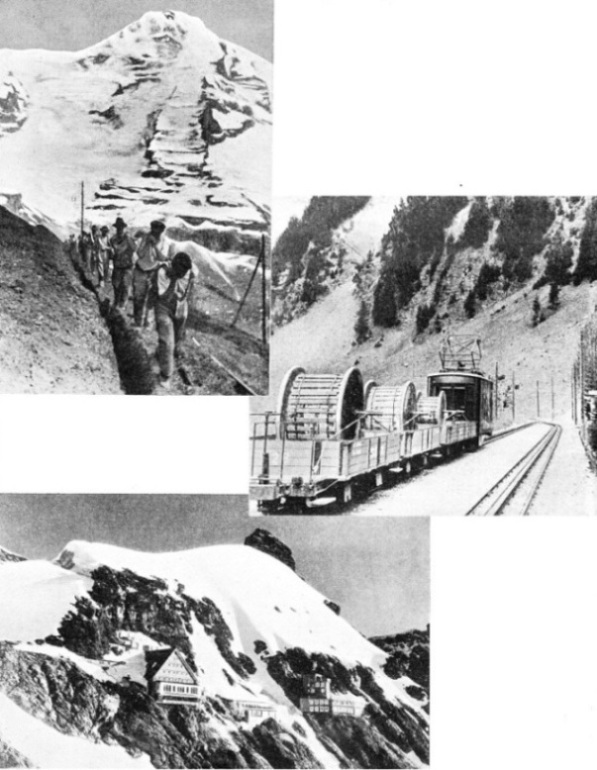 At a height of 11,340 feet above sea level, in a chamber blasted from the rock of the Jungfrau, one of the highest mountains in the Bernese Oberland, engineers have built a telephone exchange, from which it is possible to communicate with other subscribers all over the world.

LAYING THE CABLE near Wengernalp, among the foothills of the Jungfrau. The telephone cable was laid from Lauterbrunnen, in the main valley, through Wengernalp to Jungfraujoch, a ridge of

The Jungfrau more than 11,000 feet above sea level. This is the terminus of the electric mountain railway which runs from Scheidegg through long, inclined tunnels in the precipitous face of the mountain. The telephone cable is nine and a half miles long.

CABLES AND MATERIAL were transported from Lauterbrunnen on the Wengernalp Railway (above) to Scheidegg, the

Junction for the railway to Jungfraujoch. The Wengernalp Railway is built on the rack-rail system. Electric locomotives are used, drawing electricity from overhead conductors.

ON THE FACE OF A PRECIPICE are built the terminus of the Jungfraujoch Railway and the hotel served by Europe’s highest telephone exchange (above left). The exchange is designed to communicate with a well-known climber’s hut, the Concordia Hut, on the Aletsch Glacier, which is thus linked with telephone subscribers all over the world.

You can read more on the Jungfrau Railway in Railway Wonders of the World. 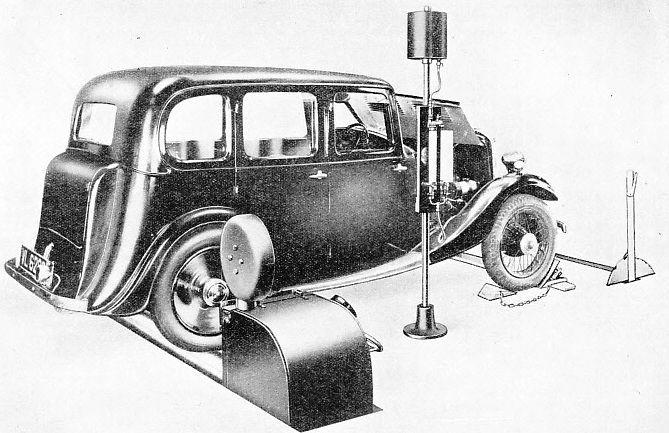 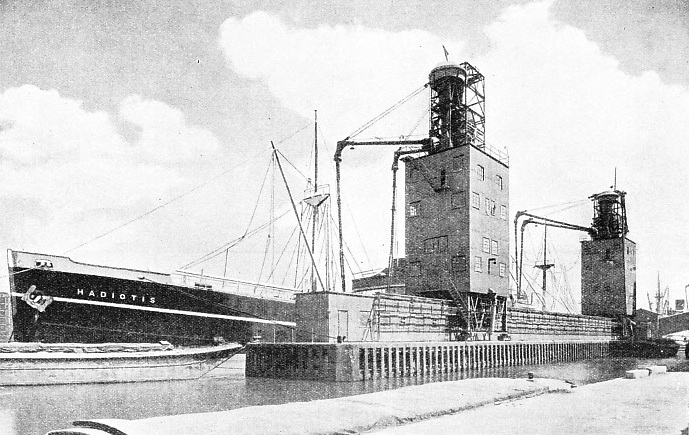 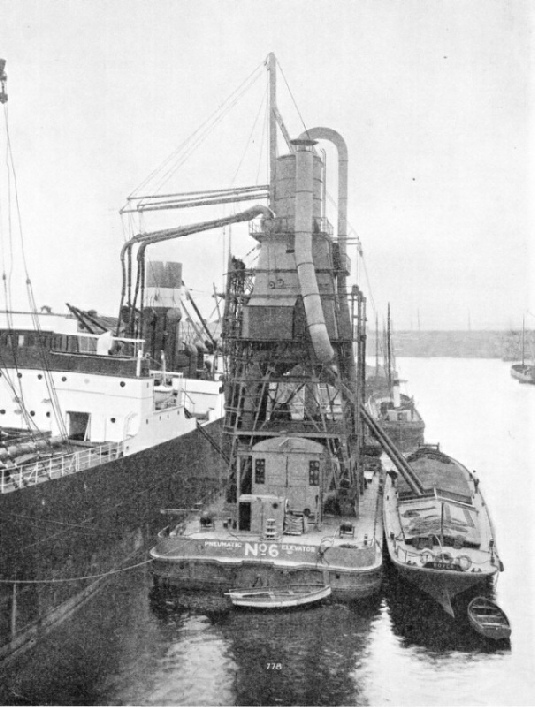 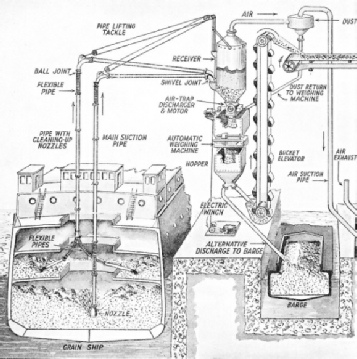 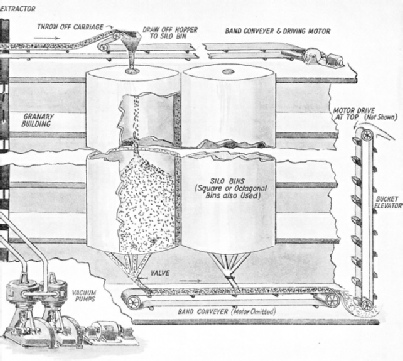 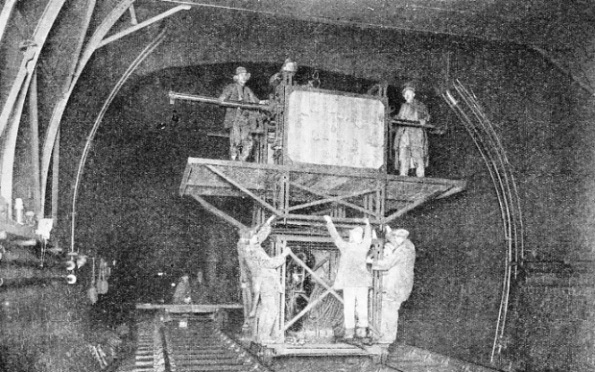 IN THE SEVERN TUNNEL a length of nearly 2,000 yards of tunnel lining was treated by the Francois Cementation process, to prevent the seepage of water. A special drilling carriage, running on two inner rails of the double track, was used for drilling the holes for the injection of chemicals and cement. This process is frequently used for consolidating work in waterlogged ground. 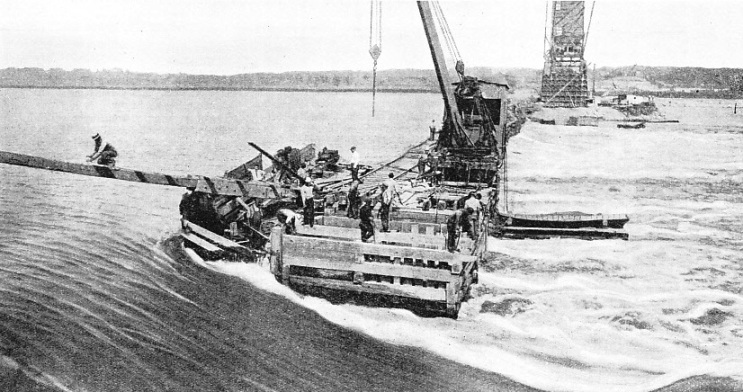 AN UNEXPECTED FLOOD of exceptional severity which threatened to engulf the works of the power plant at Keokuk, Iowa, on the Mississippi. An embankment of timers, stone, earth and sandbags was built out across the river to protect the cofferdam while foundations were being secured. The sudden flood threatened to demolish embankment and cofferdam. The embankment had to be heightened with sandbags and the cofferdam strengthened. Men had to place these bags on a wall two feet wide, with water dashing over their feet and the wind blowing with hurricane force.